For the Love of Star Trek 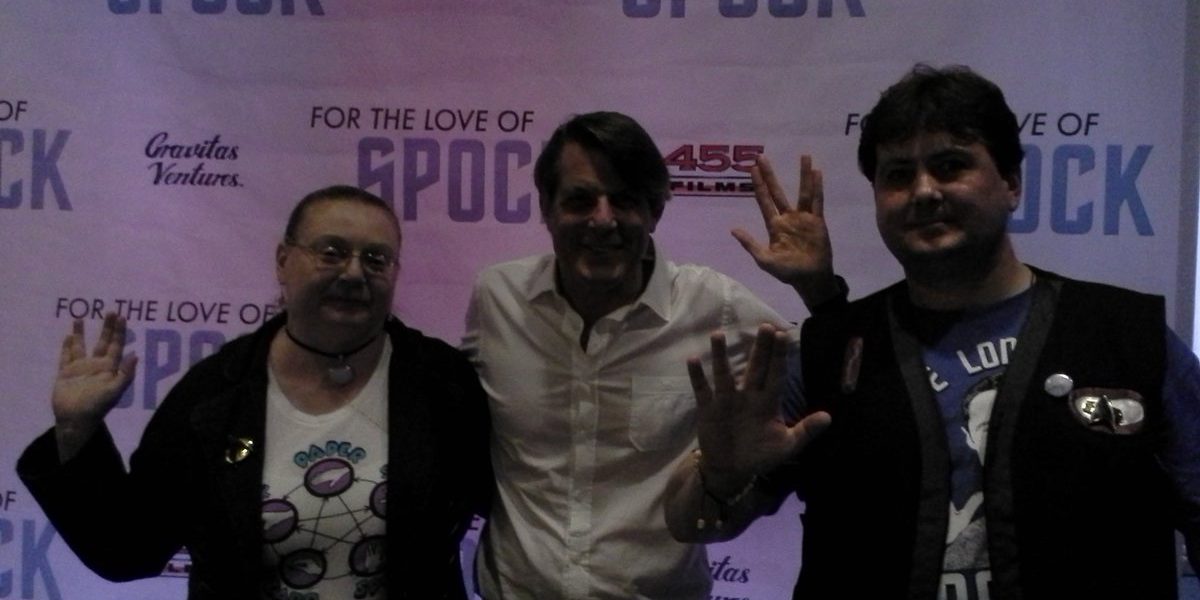 EDITOR/AUTHOR NOTE:
This article was posted in early June as a prelude to seeing the For the Love of Spock documentary on the previous version of the GH website. My wife and I have since seen the film and a review forthcoming.  This article is the beginning of a series concerning the 50th Anniversary of Star Trek.  Following this article in June I conducted an interview with Star Trek author Keith DeCandido alongside my fellow slouchers Zaxley and Jared. That interview is available on our Sub-Etha Channel 42 waveband but I shall be writing an article to supplement the interview very soon.

At the age of 44, I have been a Star Trek fan for the last 38 or so years of my life. I first grew up with the adventures of Bilbo, Frodo, Gandalf, Hobbits, Dwarves and more from the work of JRR Tolkien. In 1977 at the age of 5 my father took me to see Star Wars: A New Hope in the theater, and have been a lifelong fan of both Tolkien and Star Wars ever since. Both have been influential in my life to this day, as a person and as a writer. However, Star Trek is greatly embedded in my heart, mind and creativity. Trek inspires me in different, and sometimes greater, ways than Tolkien or Star Wars. In this article I will talk a bit about my own personal Star Trek fandom, the passing of Leonard Nimoy, the film For the Love of Spock by his son Adam, and the Star Trek 50th Anniversary here at Galactic Hitchhikers.

I have watched and re-watched all of TOS, TNG and other spin-off shows, such as Enterprise, which my wife and I are currently nearing the end of its 4 season run in our re-watch. I fondly recall at the age of 6 or so being in the living room of our Brooklyn apartment on the floor playing with Spock and Kirk dolls, 1978 or thereabout, with my younger brother. We would re-enact the adventures we saw on television with those Trek dolls and rather than using our thumb and forefingers as guns, like in a game of cops and robbers, our pretend pistols would be phasers shooting Klingons or some other bad alien encountered by Kirk and Spock.
In 1979, at the age of 7, my father took me to the Woodhaven theatre to see Star Trek The Motion Picture. I was in awe to see Trek on the big screen, to this day TMP holds a very special place in my heart and very grateful to have seen it in the theatre at the time.  My younger brother was too young at the time to go see the movie with us,and sit still for the whole thing. But he saw it when he was older with my parents and I on VHS. It was in 1982 when I first “met,” an actor from Star Trek.  My father took me to Queensboro Community College for an event hosted by William Shatner.  I clearly recall filing into the small auditorium (at least I recall it being small) and seeing Captain Kirk up at the podium, William Shatner himself. He spoke a bit of his role and then the episode “Shore Leave” was screened. To this day because of that event, I love that episode even more! It’s fantastical elements, being a fan of fantasy, it humor and funny bits, drama of the situation all resonate positively with me. As a child, adolescent and teen I was writing a bit, thanks to my parents who allowed me to read anything I wanted and encouraged the creativity.  I still have Star Trek short stories, and even an attempt at a script for an episode, which one as a TNG attempt at bringing the Gorn into the TNG universe.

The Shatner Queensboro Community College event was the beginning of a taste for conventions for me, celebrating Trek with other fans. While in high school, 1986-1990, my best friend Brian and I were inseparable friends and big Star Trek fans.  We watched, at either of our homes, TNG, DS9, and Voyager. Whenever I watch an episode from those series, I cannot help but to reminisce about those beloved moments of my life with him. Unfortunately, Brian was bound to a wheelchair due to Muscular Dystrophy.  After high school, I joined the US Navy and Brian went on to college; we drifted apart a bit but when I was discharged we got together again and would explore Trek a bit more. It was not often Brian went out to events by himself as it would require public transportation, which was at times a hardship. His parents had a special van with a lift that would take him place to place. However we did convince his parents to allow us to travel on public transportation to a convention, which I shall never forget.  In 1995 my best friend fell ill and passed away from complications of Muscular Dystrophy. I did not watch the entire run of Enterprise when it first aired due to a few personal reasons and complications in my life– one being it would have been the 1st series I did not watch with Brian.

However, it was not until the 1990’s that I first attended a Trek convention, and one with my friend Brian as cited above.  The NYC Penn Hotel, as it was called at the time hosted numerous conventions where I met many actors/actresses from not only TOS, but TNG, DS9 etc. I fondly recall asking George Takei a question about fencing, meeting James Doohan and discussing Star Trek VI, and riding the escalator with Jonathan Frakes. I also joined a small Trek fan group here on Staten Island (the often forgotten borough of NYC), where we celebrated the 25th anniversary of the 1st moon walk.

Since that time conventions have become hugely popular, but became less and less prominent in NYC. But I have consistently maintained my fandom reading the novels, meeting authors who I admire like Keith DeCandido and corresponding with and Friending a few others on Facebook like Dayton Ward, Michael Jan Friedman, Peter David, and David Mack. Additionally, I have my ever growing collection of Star Trek items, at times having to shuffle bookshelves and other areas with which to accommodate costumes, props, toys, and models.

With the passing of Trek related stars, James Doohan, DeForest Kelley and others I found myself very emotional,  having a cry at hearing the news. The Trek greats that have left us are hard as they portrayed characters we all know and love. As fans we may have met them, had a personal moment to share at a con, and admired their non-Trek work and life events. Each Trek character has skills and expertise we admired, and perhaps related to in someway, equally so with their life events, such as James Doohan and Leonard Nimoy’s military service for example.

On February 27th 2015 the world lost another Star Trek persona, Leonard Nimoy, who as we all know portrayed the iconic character of Spock.  This loss was absolutely devastating to fans: the emotion and the shock.  I saw the news and cried, that deep well within our chest that boils up and vibrates our soul just poured out.  My wife and I wept while watching news reports, reading online stories and picking up the local newspapers, some of which I saved in our library. It was not that Spock was just a character on a TV show; it was that as I grew older, certain aspects of that character became a part of me. From looking at situations logically, approaching decisions rationally, collecting data, and research playing prominently in my career as an Independent Scholar and Writer.  Whether it was from memories of reading I AM SPOCK,  listening to “The Ballad of Bilbo Baggins,” or collecting the Spock doll from my childhood, the Enterprise’s resident Vulcan was as much a part of my character make-up as that of the work of Tolkien.

On June 3rd 2015 the son of Leonard Nimoy, Adam Nimoy, launched a project on Kickstarter to honor his father’s legacy, a documentary film entitled For the Love of Spock. This was a project I immediately felt absolutely needed to be made.  Of all the fan films being made (some I enjoy more than the others) and Trek-related projects, this was this one I have felt the strongest for.  When this project was launched, my wife and I had a bit more room in our budget than we do currently so we pledged alongside 9,439 others. We donated toward a package that included 2 tickets to the For the Love of Spock NYC Screening and Reception.  Within the last few days I sent in the survey for the backer screening of our choice and we chose June 24th at the  The Leonard Nimoy Thalia Theater
. This will be the 2nd major event I am attending during the year long festivities surrounding Star Trek’s 50th Anniversary. What better way that to honor Trek, a beloved actor and character than being a part of a film and event than one celebrating the life and legacy of Leonard Nimoy as told by his son in For the Love of Spock. The idea of donating was not just the cool package of a screening and reception, but to be a part of something special, a film that would be an essential part of our collective fandom.

I cite this event being the 2nd major event my wife and I will be attending. On March 5th 2016, Star Trek the Ultimate Voyage Symphony Concert came to Madison Square Garden, right across the street from where I first attended a Star Trek Convention.  We had bought tickets when they first went on sale, but there was a Facebook contest for free tickets. A part of the rules was you had to write a review of the event for the Ultimate Voyage website if you won the tickets.  I said what the heck,  entered into the contest, and noted, as per the rules, about being a writer.  A few weeks later I was notified I had won!!! So I made all the arrangements with the crew from Ultimate Voyage, and attended the concert with 2 friends, which I had given our bought tickets to.  I spent the entire weekend writing, with my wife, the review, which you can read here

For me, celebrating 50 years of Star Trek is a monumental occasion.  Of course I was 6 years away from being born when Star Trek first aired, but to be a fan of something that has endured for 50 years in popular appeal, has integrated into pop culture, and has been a part of cultural consciousness is mindblowing. I am without words at times as how much Star Trek means to me and millions of other fans.

It is with this I shall close by saying that this article will serve as an introduction into the Galactic Hitchhiker’s celebration of Star Trek’s 50th. I encourage all of you to post your own personal Star Trek stories, reviews, events and pictures.
If you are in NYC and wish to join fellow Galactic Hitchhikers at 2 upcoming events: The Starfleet Academy Experience at the Intrepid Museum (Opening July 9th)

And/or Star Trek Missions NYC at the Javitts Center September 2-4, then please join our facebook group