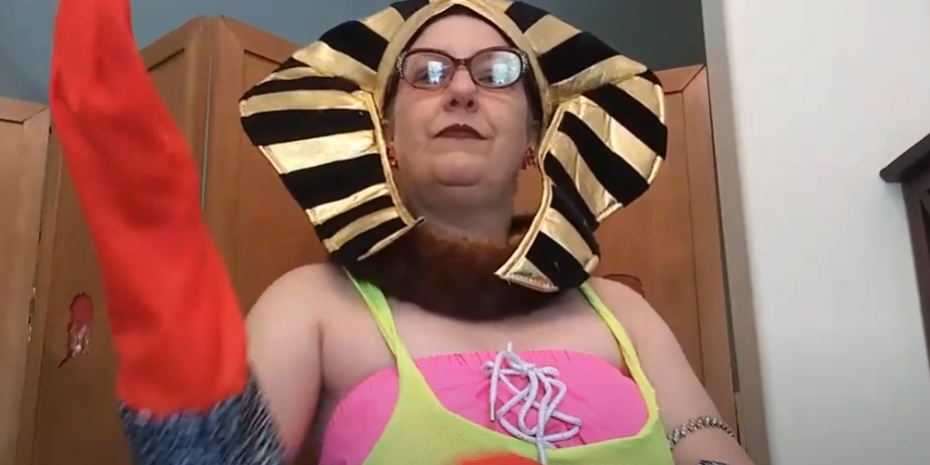 In the decade long saga of Galactic Hitchhikers, Towel Day has always been a day of the best intentions, and too one wrought of technical difficulties and unexpected happenstance that gets in the way of even the best laid plans of mice. This year was of course no different.

The planned live stream this year was going to include a playthrough of Starship Titanic, podcast highlights from the Hitchhiker’s & Appetizers podcast, and the official announcements for the winners of our Second Annual Worst Dressed Sentient Being in the Known Universe Contest. The plans were made, and were on display. The tech was sorted. Everything was perched and ready to roll and about to launch.

The whole block had it’s electricity knocked out by wind. My bloody power went out.

Folks, Towel Day isn’t something that anyone should be stressing over, but I do. I make all these plans. I do all these things. Starting at 90 days until Towel Day I go to war with Facebook’s algorithm to spread the word. If Facebook’s algorithm was a street gang I would battle the motherfucker with broken bottles and chains, but that’s another tale to tell. I do everything I can to spread the word of the Frood, to honor Douglas Adams, to put a towel on every shoulder and a smile on the face of every frood I can talk to. Why? Because I am Zaxley Nash and this is the way.

The power went out and I laughed like a madman. 47,000 Galactic Hitchhikers and suddenly my computer is dark. The power company told me over the phone that it would be several hours.

Don’t Panic! I did panic just a little, to be honest. But then I just went to the beach. Towels love the beach, right? I walked down the shore and collected beach glass, a fine haul today might I add. All large pieces today, several green, and a big floral looking hunk of fossilized crinoid to top it all off. Very Zen stuff. Very needed. Sure, I didn’t get to do any of the things I had planned for the big day, but I think I did what I needed to do.

“I may not have gone where I intended to go, but I think I have ended up where I needed to be.”

― Douglas Adams, The Long Dark Tea-Time of the Soul

When I got back to my house I was pleased to find that the power had been restored. I was going to do a live video feed and try to get back on track of the original battle plan, but after the beach I decided to stay where I needed to be. Instead we opened up a video chat room. Of course this cut the audience down quite a bit, but you know…I was fine with that, and I am very happy with the choice. With almost 50 thousand people in our group it is very easy to get pretty far away from what makes the group fun, by talking and connecting to just a few people I touched on the reason I started the whole shebang: To talk and connect to people.

Thanks to the froods that were in attendance last night, 2021 ended up being one of the better Towel Days I have had in years. We are going to do more of that again soon.

Roz wins! It must have been the cat, maybe it was the rubber boots. Honestly I think that rubber boots were the real winner this year, a popular option among our contestants for 2021. Roz took the lead early and kept it, ending up with 36.5% of the vote. Our 2021 Towel Day Ambassador Victoria was just behind Roz with 24.6%. Tylenol Jones, with 14.9% wins the honor of being known as the Third Worst Sentient Being in the Known Universe. Thanks to everyone who entered this year! I’m sure that Christie, Jess, and Jo can find somehow to move on knowing that people don’t think they dress that badly.

2021 Towel Day Ambassador Victoria Jesswein is hosting the Towel Day After Party Disco, a video chat event this Saturday, May 29th at 3:42pm CDT, I hope to see many of you there!

Galactic Hitchhikers has more Tao of the Towel coming soon, and a another new series of space tabloids cooking, Galaxy News Weekly is coming soon. Stay tuned, subscribe, and stay hoopy my friends!

Vote Now! The Worst Dressed Sentient Being in the Known Universe Contest 2021
May 15, 2021

Worst Dressed Sentient Being in the Known Universe Contest: Five and Six!
May 15, 2021