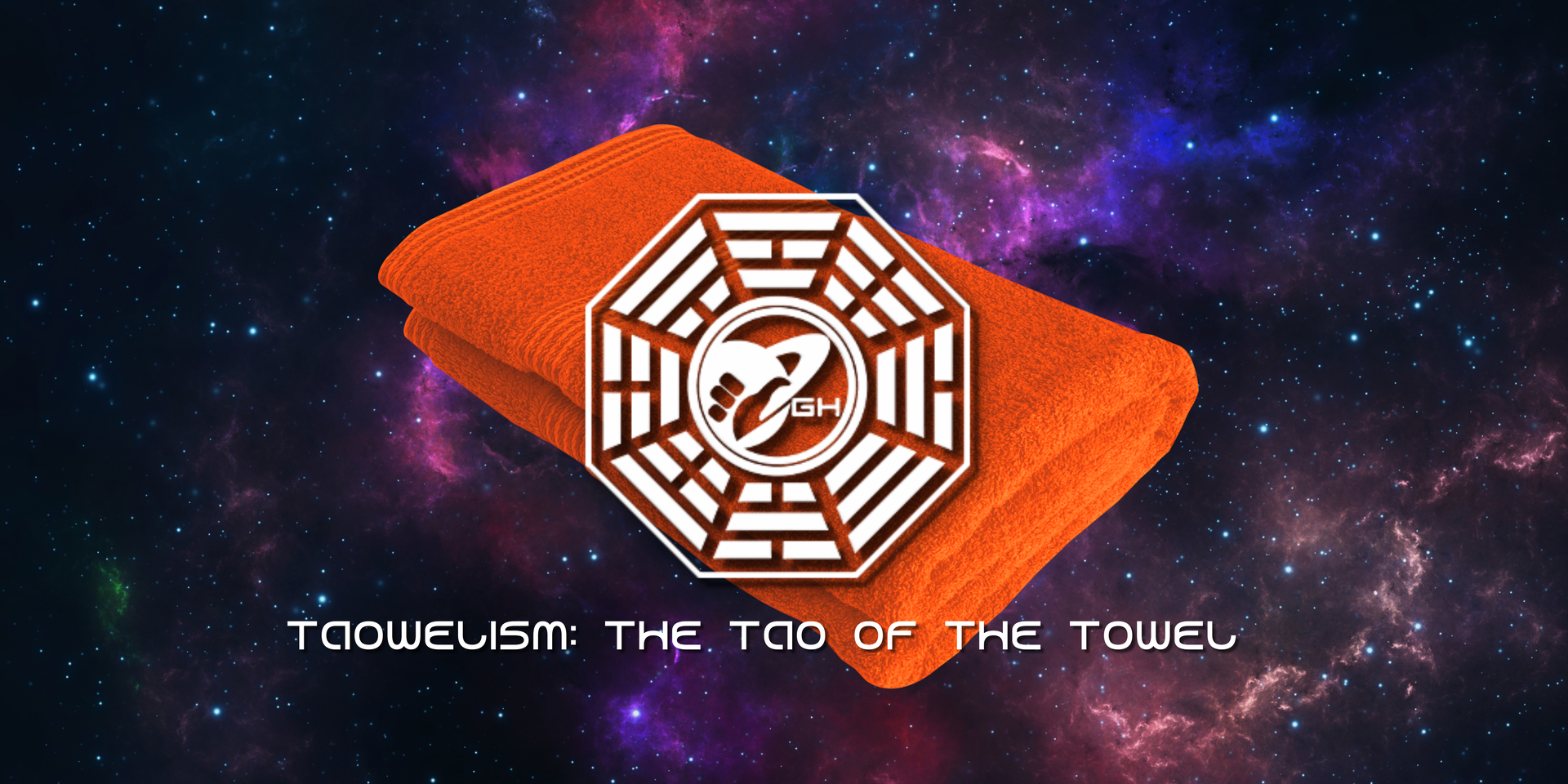 Taowelism: The Tao of the Towel

Froodism and the Way of the Galactic Hitchhiker

Sometimes one starts down a new path, and although it seems to be the way, it just isn’t. Sometimes that path may be parallel, and maybe lead roughly to the same place, but there is a better way. A way with more rest stops, diners, and dives along the way. Sometimes a freshly laundered towel is what we need. We don’t always go where we intended to, but we end up where we need to be.

Some time ago I started to explore the idea of comparing the Hitchhiker’s Guide to the Galaxy to the teachings of the Tao, similar of course to the way Dudeism does in their Dude de Ching. Why not Froodism? If a rug ties the room together, I thought, surely a towel binds the cosmos. If the Dudeists have derived a whole religion from one film, what can we do with all the writings of Douglas Adams? So was born Froodism, Tao of the Towel, or Taowelism: the Way of the Galactic Hitchhiker.

I set about the work in earnest, and put up a few blogs here on the site. The research was, and continues to be a delight, splitting my time between the sacred Tao and the sacred texts of Douglas Adams. As I went on I started to think that there might be a different approach. What I had been doing is taking each of the Tao, and wrapping the Guide into it, again, in the fashion that the Dudeists do with the Dude de Ching. As illustrated in the blogs I published, this is an interesting endeavor, but I started to feel like I was going the wrong way with it. I was going by the Tao one by one, in order; I realized this seems unfair and not really organic to the Guide itself.

Chapter by chapter we’ll explore the Way of the Galactic Hitchhiker with our hero Dent Arthur Dent and follow his journey into a more galactic awareness. We’ll learn the customs and traditions of the path with Ford, the importance of being happy and where it all falls apart from Slartibarfast, and how sometimes having an extra head comes in handy with Zaphod.

With each installment in this series I will post a new Taowel (Tao), inspired by a chapter or portion of the Guide. Keep in mind I am starting a project for our community, not offering a product if you savvy. When I started with the Taowel I found myself feeling like something was missing. I started to have that Moses coming down from the mountain with tablets feel, and frankly it didn’t sit right. Funny that in delving into the Tao I was reminded of that whole humility thing. Not the messiah, rather a very naughty boy.

What I found missing was YOU. Within the ranks of Galactic Hitchhikers we have plenty of Philosophers, Sages, Luminaries and other Professional Thinking Persons. The Tao of the Towel is something we can amalgamate with, combine our collective wisdoms, and hopefully learn and grow this thing together.

There will be two blog series with this project. The first is the Tao of the Towel. Each week we will explore the Guide, chapter by chapter. I’ll offer up a Taowel based on the chapter, and invite everyone to help refine and hone it down. The current plan is to have a Taowel up every Saturday, allowing of course for the theory that life is what happens when we are busy making other plans.

The second part of this project is The Way of the Galactic Hitchhiker, a series of tips, tricks, life hacks, practices, practicalities and traditions based not just on the Hitchhiker’s Guide to the Galaxy, but all Sci-Fi. This part will heavily depend on participants to submit Field Research.

Just after Towel Day we will once again be offering membership to the site. I am waiting to start the work until after the holiday because I may need to take the site down for a day to build, and I am very likely to screw up something, or everything more than once.

There will be user profiles, a newsfeed to post on, the ability to make groups, forums, and more, all to support this project, and pull Galactic Hitchhikers into a tighter knit community again. Let’s face it with the Facebook group, it’s a lot of fun, but it has become harder and harder with the growth of the group and the algorithm working against us to get any real point across or to communicate as a community in any meaningful fashion. We had membership here before, but I don’t think we were ready for it yet, or that there was a need back then. “For whatever reasons, Ray, call it… fate, call it luck, call it karma, I believe everything happens for a reason,” now is the time.

I will need a team of froods to walk away from explosions in slow motion with me. Starting next week with the First Taowel: “Yellow,” everyone will be invited comment and discuss, tell me I’m an idiot and so on. Once the membership features here go live we can start to have more nuanced conversations, and hammer out some rigidly defined areas of doubt and uncertainty. Once we have 42 Taowels we’ll see what we can do to get our collaborations in print, and if I can sort out the legalities and Vogon poetry of it all maybe even start ordaining Froodist priests.

For now, stay tuned! Make sure to subscribe, or you will be late…

The Tao of the Towel: Infinite Improbability
March 14, 2020

The Day of the Frood: Celebrating the Birthday of Douglas Adams
March 11, 2020

The Tao of the Towel: Lovely Crinkly Edges
February 29, 2020