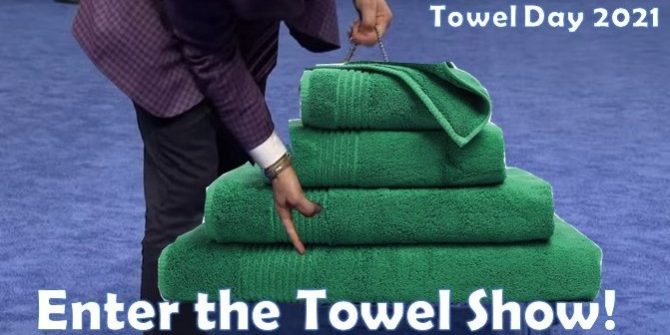 Is your towel a champion? Are its nutrient-soaked stripes the epitome of its kind? Does it bear the battle scars of run-ins with the Ravenous Bugblatter Beast? Share your towel and its story! It might win “Best of Show” (or “Worst in Show” or “Furthest Travelled” or “Towel That’s Been Used in the Most Inappropriate Way”…)

To enter, simple comment a photo of your towel on the Towel Show post (link below) and tell us a bit about how it’s served you as a galactic hitchhiker. How far has it travelled, what innovative uses have you found for it, and what array of liquids has it absorbed?

TL/DR FOR OFF-WORLDERS FOR SOME REASON THIS EARTH PERSON WANTS TO JUDGE YOUR TOWEL. WHILE STAYING IN SECTOR ZZ9 IT IS ADVISABLE TO OBSERVE THE LOCAL CULTURE, SEND PICTURES OF YOUR TOWEL

Vote Now! The Worst Dressed Sentient Being in the Known Universe Contest 2021
May 15, 2021