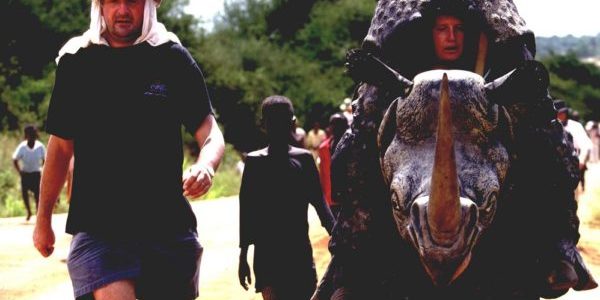 On 11 March 2021, Save the Rhino International will host The Douglas Adams Memorial Lecture in a star-studded event presented by 15-time Tony Award nominee Arvind Ethan David, Baroness Susan Greenfield CBE, Samuel Barnett and Hannah Marks, two of the lead actors of Netflix’s Dirk Gently’s Holistic Detective Agency, who will reunite for the first time in a special performance.

The event celebrates the conservation legacy – and birthday – of renowned sci-fi author Douglas Adams who was a founding patron of Save the Rhino, as well as the 42nd anniversary of the publication of A Hitchhiker’s Guide to The Galaxy. In a fitting tribute 20 years since Douglas’ death, this commemorative event will bring together many of his loyal fans and raise vital funds for rhino conservation.

This year’s digital event will include a lecture from neurologist and long-standing friend of Douglas, Baroness Greenfield CBE, who will share some fascinating insights into the creative mind and how to overcome the unprecedented challenges posed by current times. Arvind Ethan David, who is responsible for bringing Adams’ character Dirk Gently to life on stage and screen, will also share memories about working with Douglas and how his rhino conservation legacy continues today.

Douglas Adams was inspired to get involved in rhino conservation whilst making Last Chance to See, a 1989 BBC radio documentary series and its accompanying book, written and presented by Douglas Adams and Mark Carwardine. In the series, Adams and Carwardine travel to various locations in the hope of encountering species on the brink of extinction, including the now functionally extinct Northern white rhino. The book was published in 1990 and in 2009, Stephen Fry and Mark Carwardine recreated it for BBC TV.

The famed science fiction writer remained so committed to rhino conservation that he once joined Save the Rhino’s founders Dave Stirling and Johnny Roberts for a climb up Mount Kilimanjaro in a rhino costume, writing about this event in The Salmon of Doubt. After his death in 2001, his family began working with Save the Rhino to set up the Douglas Adams Memorial Lecture, an annual event focusing on topics that Douglas was interested in, such as science, exploration, conservation and comedy.

2021 is not only a significant year for Douglas’ literary legacy – ‘The Answer to the Ultimate Questions of Life, the Universe, and Everything is 42’– it is also critical to maintaining Douglas’ conservation legacy, following shocking news from South Africa about the dramatic decline of rhinos in Kruger National Park, and the total number of rhinos poached in 2020. These issues continue to highlight the critical need to carry on the important conservation work that Douglas was so passionate about.

“If Douglas were alive today, I think he’d be both depressed and excited about what’s happened in rhino conservation during the last two decades. The Northern white rhinos that he and Mark Carwardine went to see in Garamba National Park are down to just two surviving females; the Western black rhino was declared extinct in 2011. On the other hand, I reckon he’d be fascinated by the ways that new technology and the internet have totally transformed rhino conservation. I’m really pleased that, once again, the Douglas Adams Memorial Lecture will bring people together to explore Douglas’s interests, mixing conservation, science and humour, and – for a couple of hours – take us out of our own patches into new territory. We may not be able to travel, but our minds most definitely can.”

“One grey day in November 1993, Johnny (Save the Rhino co-founder) and I went to see Douglas and Mark Carwardine speak about their latest book, Last Chance To See. It was billed to be a funny evening and it didn’t disappoint. Douglas found himself standing on top of a termite hill staring at another termite hill through binoculars. He knew what he was standing on was a termite hill, but was disappointed that the thing he was staring at wasn’t a Northern white rhino. We both looked at each other and thought wow we have something in common with this man, which few people do. I’m looking at a dog-eared copied of that book, and inside the front cover there is Douglas’s signature and a message to me that says ‘To David, wish I was coming the rest of the way, and indeed I will be thinking of you having fun freezing and vomiting on Killi while I am languishing in bed in Islington.’

He was, and remains, a creative force within both the literary and conservation sectors, and his legacy will always be remembered and appreciated.”

The Douglas Adams Memorial Lecture takes place on Thursday 11 March 2021 at 19:00 GMT. Tickets are now on sale exclusively from StellarTickets.com. The event is endorsed by Douglas Adams’ estate and publishing house.

CLICK OR TAP HERE For more information about the event.