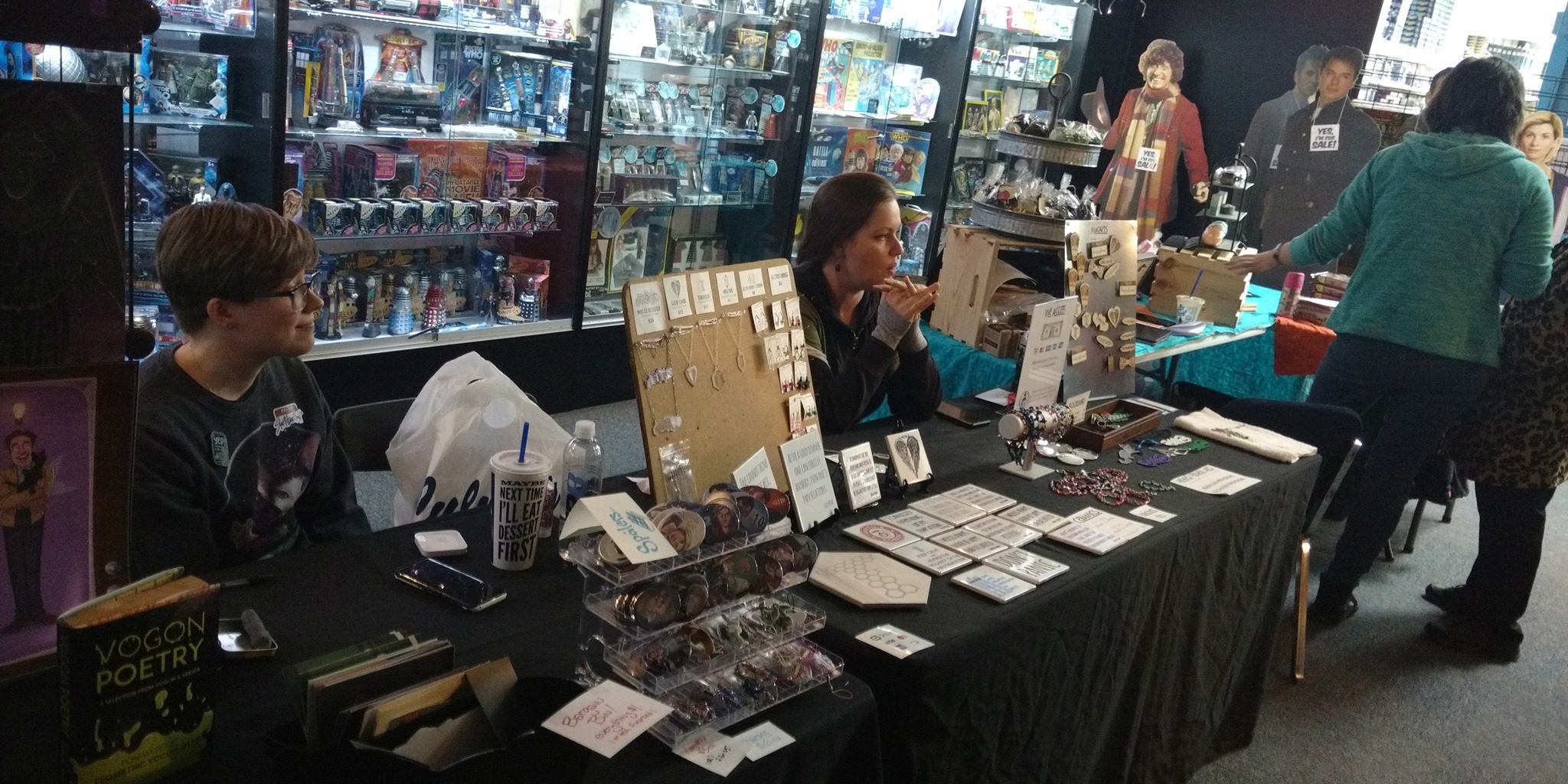 In the middle of the previous year, my wife and I moved from Los Angeles to Indianapolis.

We didn’t know any of the local humans.  Being a Doctor Who fan however, one of the places I absolutely needed to visit was the Who North America store in Camby.  For a Doctor Who fan, it is heaven on Earth.  The store owner, Keith Bradbury is always friendly and welcoming.

On my first visit there, Keith pointed out that they would soon be having a party called Doctoberfest.  It fell on October 26th… my birthday!  I decided to take it personally.  So I felt very special indeed!  This was far better than any party I would have had to endure back home with relatives.

Meanwhile, online, specifically Facebook’s Galactic Hitchhikers community, there had been some discussion some months back on whether or not to celebrate the 40th anniversary of The Hitchhiker’s Guide to the Galaxy, or the 42nd.  A quick poll showed that everyone was much more interested in the 42nd.  But nobody quite knew what to do on that fateful day.

At some point around the Doctoberfest party (AKA the unofficial John Chanaud birthday party), I asked Keith if he also liked The Hitchhiker’s Guide to the Galaxy.  He said that he did.  I then suggested the possibility of doing a party for the upcoming 42nd anniversary in the same style as the Doctoberfest.  After a couple seconds of mulling it over, his eyes lit up and ideas began to fire off in his mind.  He immediately suggested several things they could do for the party, all of which were great ideas.  I had one idea: rent a bulldozer, park it outside the shop, and people could lie down in front of it and get their photos taken.  Well… that didn’t happen. But the rest of the party did.

And so, on March 7th, the day before the actual anniversary, my wife and I arrived shop.  Festivities were already well underway.  Ever the gracious host, Keith stood there in his dressing gown, welcoming one and all.  There were vendors nearby selling their homemade Hitchhiker’s-related merchandise.  There were free babel fish (Goldfish crackers).  There were pan dimensional beings in a cage (two white mice)…. (Yes, actual mice.)  The radio show was playing on the speakers, and the TV show was playing in the next room.  There were Arthur Dents in their dressing gowns everywhere.  And the overall atmosphere was as relaxed and cool as Zaphod Beeblebrox half way through a Pan Galactic Gargle Blaster.

At two-thirty the trivia contest began. I entered.

I got the first question right (what was the title of the Eagle’s track used for the signature tune to radio show? Answer: Journey of the Sorcerer. Easy!). I got the next one right. And the next. Before I knew it, we were down to just two people. Myself and one other obsessive fan. What was the name of Arthur Dent’s home town? I knew that it wasn’t Islington, but I couldn’t think of any other towns mentioned. So I wrote it down… Islington. And got it wrong. But…! So did the other guy! I was still in with a chance! Next question: Who were the cooks employed by the Vogons? Another easy one! Or so I thought. The other guy announced that he simply didn’t know. So I wrote down on my trivia competition post-it: Dentrassi. And I won! Hurray! I got a free Hitchhiker’s towel and keychain.

And the party continued. The whole of the affair was cosy and warm. People joked with one another in a very friendly, almost family atmosphere. We were all there to celebrate something we love. Something brilliant. The unique vision of a genius who loved both comedy and science. And philosophy. And life, the universe and everything.

On our way home, we stopped at a little Italian restaurant. Still wearing my hitchhiking shirt and Don’t Panic satchel etc, one of the waiters came up to me and told me that he was a fan as well. He told me that his dad had turned him on to Hitchhiker’s. His dad? When I first discovered it, it was friends turning it on to other friends, and our parents just didn’t quite get it. But then I looked again. This fella was clearly in his 20s. While I… have to admit… am lost somewhere in my 50s. My wife then pointed out to me how great that was and how we were all are, keeping Hitchhiker’s alive. We had just come from the party, while other people are quietly passing it on to the next generation. It looks as though The Hitchhiker’s Guide to the Galaxy is here to stay.

I smell like flowers. I eat pizza. I vibrate at a BF rate of 18.