Skip to content
Life, the Universe, and EverythingPlanetary DestinationsThe Adventures of Zaxley Nash 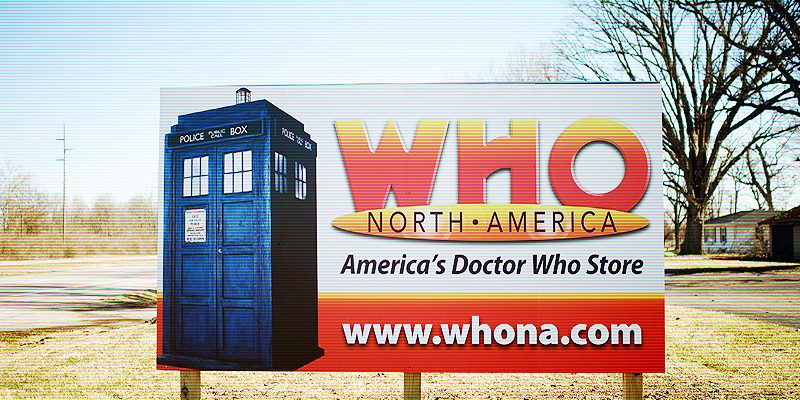 “Far out in the uncharted backwaters of the unfashionable end of Indiana, is a remarkable store and museum dedicated to all things Whovian.”

Just a short drive out of Indianapolis

The Who North America is a stop sure to wow fans of Doctor Who young and old.  Whether you are a fan of the classic series, or the new, there is definitely something here for everyone.

Who North America was something I had heard about some time before my visit, but I am rarely, if ever, in that neck of the woods. I live in Northwest Indiana, just a hop outside Chicago, and Camby is on the other side of the state. It was definitely something I had wanted to check out.

My brother moved down to Louisville Kentucky recently, and my niece (who lives with my wife and I), went down there to stay with him for a week. It came to be that neither of us really wanted to make the whole drive. He didn’t want to come all the way up to bring her back, and I had already driven the 4 hours along I-65 too many times. Those who have driven the route from the Chicago area to Kentucky might share this lack of enthusiasm with me. While I love almost nothing more than a long trip in the car and crossing long expanses of the country is among my most favorite things to do, this particular route is not particularly scenic, and is studded by bits and pieces of traffic and perpetual road work.

So we agreed to meet half way, in Indianapolis. Indy is not really half way for me, but it’s a lot closer than Louisville, and there are a lot of really great places to eat at on Broadripple Street. Our last trip to Indianapolis we hit the Sahara Restaurant and had a jolly good lunch, and I had noted an interesting Cuban place across the street, so Indy seemed like a great idea. I am very food motivated as it goes, promise me good food or good brews and I’ll go where ever you want me to. Because my niece is gluten intolerant I figured we’d check out Native Bread, for Indy’s finest artisan, gluten-free breads. Learning to cook gluten free is probably the subject of another blog yet to come, but I digress.

The day before we drove down I was sitting at a local Chinese joint sipping tea and planning my next self punishing trip to the buffet. In the next booth was a couple talking loudly on separate phone calls, you know, the kind where you have no choice but to be a part of the conversation. The woman was chatting on about her mother in law or some such, and gave the gentleman a cross look for talking over her on his call before abruptly getting up and going outside to talk more. One down, I thought. Even as I was deeply attempting to ignore this man’s conversation, and was about to get up to go get another unneeded plate of General Tso’s, I heard him say:

“Yeah, it’s a whole museum based on Doctor Who,” he paused.

Continuing, “Down right outside of Indy, remember Pete used to love Doctor Who?”

A bell rang in my head, “Oh yeah!” I don’t know who Pete was, but he must have been alright.

The store is amazing

Nearly any Doctor Who related toy you could dream up is in stock. Action figures and cosplay elements, wall clocks, sonic screwdriver bottle openers, even jelly babies and jammy dodgers. I kick myself for not buying a Tardis Console lava lamp, but there is always next time.

To my utter amazement and surprise, the prices were very reasonable.

Even if you can’t make the trek to Camby, you can shop with Who North America online. Check out their robust catalog of collectibles [HERE]

Well Worth the Drive

Before we went inside we were greeted by a very welcoming gentleman in the parking lot who identified himself as the owner’s father. I feel terrible that I did not catch his name. I’m sure I got it, but my Swiss cheese memory often lets important tidbits slip away. He had the vibe of Donna Noble’s granddad, a kindly fellow. He noted my towel, and asked if I had reservations to the Restaurant at the End of the Universe. With a warm smile I introduced myself as he invited us in. I can’t say enough about the kindness and enthusiasm of this chap, Who North America is lucky to have him aboard.

The Museum is a first class affair

This is a serious collection of toys and artifacts from 50 years of Doctor Who. I was very impressed by the sheer amount locked away in the many glass cases. Action figures galore, statues and busts, and every sonic screwdriver ever commercially manufactured. Almost one of everything, including a bit of a Dalek signed by Tom Baker himself.

More than just a store, or a museum

This is a gathering place for all fans of Doctor Who, young and old alike. With video games set to free play, and space for fans to get together and meet, Who North America serves the fandom well. They host gaming nights and cosplay workshops, amidst an impressive array of charity events and functions. The Doctor would approve, I am sure.

This October the 26th will be their 4th Annual Doctoberfest, A Who Centered Fall festival. Check out the details on Who North America’s Facebook page, maybe I’ll see you there!