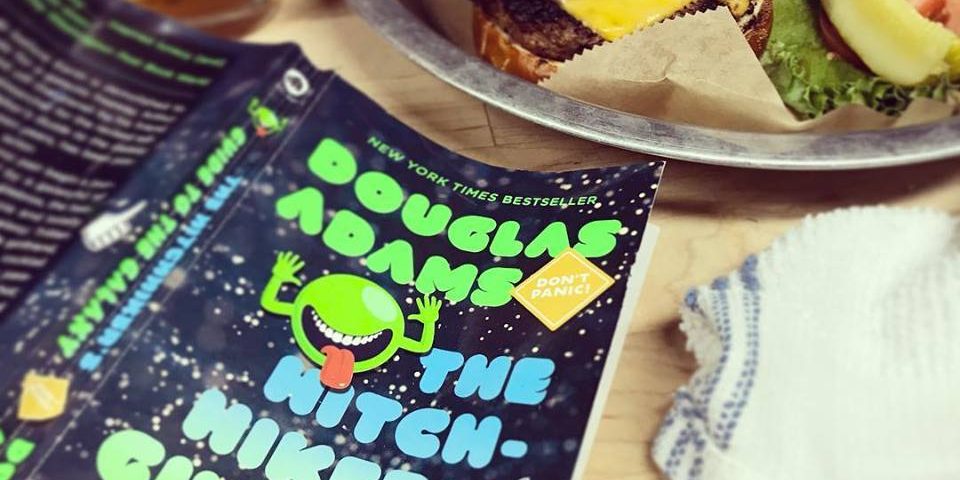 Just outside Chicago in nearby Michigan City Indiana, situated in what used to be a billiard ball factory Shoreline Brewery stands as the Restaurant at the End of the Lake. Although brew pubs are a dime a dozen anymore, Shoreline stands out and does it in a way that is distinctively Northwest Indiana. Great food, better beers, and fantastic service, you are always going to leave with a smile.

Last night was no exception, these froods proved they really know where their towels are by hosting the region’s only Towel Day event. International Towel Day at Shoreline was a smashing good time. Our small posse of intrepid Galactic Hitchhikers was greeted at the door with a knowing nod to our towels. While there didn’t seem to be many if any others toting their towels for the big day, we felt like VIPs while being seated.  Well I did in any case, but that’s probably just a mix of ego and alcohol.  A wise man once said that you can’t drink all day of you don’t start early in the morning. I had started the night prior, I was a little excited for Towel Day.

We had come for the promise of $3.00 pints of Shoreline’s Don’t Panic. It should be noted that a three dollar pint of any craft beer is pretty swell, but the Don’t Panic is exceptional. A medium bodied English style pale ale, the Don’t Panic is a tasty glass of suds.  Having our towels prominently on our heads and/or across our shoulders respectively, our hostess asked if we had come for the Towel Day event. Resisting sarcastic urges, we nodded thirstily. She told us they were serving Gargleblasters too.

So this is going to be that kind of night, is it?

It should be noted that while I am a fan of a myriad of this planet’s Pan-Galactic Gargleblaster recipes,  and I have tried a bunch, I’ve never had the privilege of having one offered up without having to explain the concoction to the bartender on duty. There are dozens of different versions of the fabled beverage. A few years ago, from the rooftop pool and bar of the Waldorf hotel in New Orleans I had made a proclamation in my capacity as a Towel Day Ambassador and over my third triple mai-tai with blue curacao; Due to multiverse theory and general availability of local ingredients,  any beverage can be declared a Gargleblaster so long as it is (A) Silly Strong, (B) Blue or Green in color, and (C) More or less tropically themed, with a bonus for little umbrellas.

What recipe was Shoreline employing for the big day’s tidings? They say it’s a secret. No surprise, the teeth of Algolian Suntigers are hard to come by in this part of the galaxy. I wouldn’t want to reveal my source either.

We were not disappointed when our beverages arrived. They were bright blue on the waitress’s tray. As she stopped to drop off beers at a nearby table our party’s thirst increased as she as she accurately described their origin to the inquiring table. Points A, B, and C were definitely intact. What was in it? You’ll have to go in and have one for yourself. We enjoyed a few rounds before switching to the Don’t Panic when our food began to arrive.

Like many Galactic Hitchhikers, our war party is quite receptive to pub food and appetizers. We ordered a few. The Scotch Eggs were fantastic. Artichoke Fritti amazing.  The Giant Bavarian Style Baked Soft Pretzel was in fact giant, and Bavarian. Dipped in Hot Pickled Habanero Beer Cheese, heaven. We threw in some of their Shoreline Poutine with Black Pepper Ale Gravy for good measure, so so good. One might think that adding an order of the house made Pierogi to the mix would be overkill, but again we were wowed and well satisfied. And if you thought it would be overkill then you do not know us very well.

We told the waitress that we were starting to panic just a little, she brought another round of beers.

When dinner arrived the foray of food continued to put smiles in our bellies. Pastrami Melt on Black Rye with Red Cabbage…oh my!  Grecian Lamb Burger sat well with my brother, while his wife enjoyed the Shoreline Mac. My lovely wife had the lovely Fish and Chips. Everything was just fantastic.

Well fed and beveraged, Towel Day was a smashing success. Although we didn’t see any other froods toting towels there is always next year….

Special thanks to Shoreline for giving Northwest Indiana a hoopy haven for Towel Day! You can connect with Shoreline Brewery on Facebook HERE