TOWEL DAY AMBASSADOR CONTEST – ROUND ONE

You are here:
Culture and Counter-CultureFroodism/Taowelism: The Tao of the TowelPolitics and World EventsRoughing it, slumming it, and facing terrible oddsThe Whole Sort of General Mish Mash 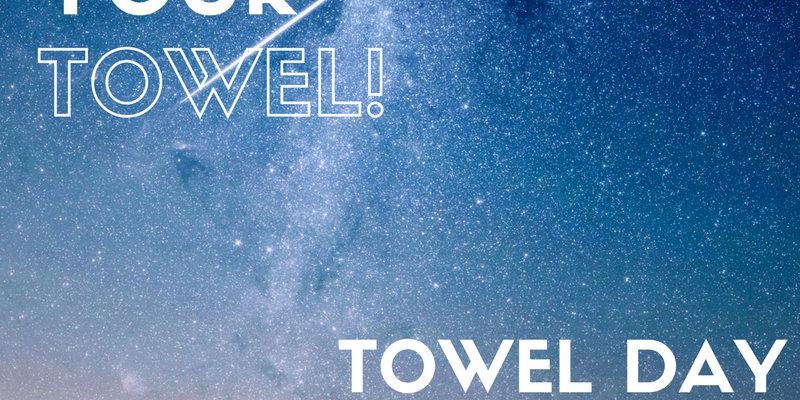 As some of you may be aware, the Towel Day Ambassador Contest is up an running this year again.

Galactic Hitchhikers is the brainchild of Zaxley Nash, the 2012 winner of the Towel Day Ambassador Contest. He has proven to be an overall hoopy frood who encourages fans to step up and be proud of their geekery.

Many of our notable members have either entered or win the TDA contest before.

Amongst the applicants were Stu Hambone, Stefan Gemzell and myself, Demetria Blacksmith. We did not win but came out with small victories nevertheless. We gained friendship and respect from our fellow Earthlings.

Members like Lisa, Joel, Hillary and Moxie are all previous winners of the contest and proud contributors and associates to Galactic Hitchhikers.

This year, the situation was no different. The entire Hitchhikers fan community focused on the upcoming contest and only the bravest, most fearless amongst all decided to put forward their application.

Six contestants have entered the ring this year, but only one of them would become the Intergalactic Towel Day Ambassador for 2018. But who are these froods anyway?

We have old renegades, such as Stefan and myself and new-comers,  both esteemed members of the group and complete newcomers.

Without further ado, I present this year’s applicants in order of their submission:

Now, it has been stated that the TDA contest will run according to the following rules:

“The Intergalactic Towel Day Ambassador will be determined through three rounds of voting. Round 1 (April 2-5): First three contestants. Round 2 (April 9-12): Last three contestants. Final round (April 16-19): Winners from Round 1 and 2, plus the next highest vote-getter from either Round 1 or 2. Official winner announced April 21. Only votes from people that like this page will count.”

Now, the first round has already started and things are about to get serious! You could cast your vote by finding the TOWEL DAY AMBASSADOR CONTEST page on Facebook. All you need to do is watch the videos posted on the page for GIO, ANTHONY and DEVIN, then head to the page and cast your vote for the candidate you liked the most using the emojis presented on the pinned post.

So these are the contestants of the first round, dudes. Please, follow the link above to cast your vote. You have until the 5th April to do so.

After a short break, we shall return for the second round and I shall see you then as it will be my time to shine.

(P.s.: Does anyone actually KNOW how to embed facebook and instagram videos in WordPress? Cause I did all the coding and stuff and still didn’t succeed. I buy you a beer and peanuts if you teach me. Love and Kisses, Z… Demi)

WE ARE CULT: BRISTOL MEET A fun, friendly celebration of cult TV!
June 4, 2019