Fit the First: A Guide to Celebrating 40 years of The Hitchhiker’s Guide to the Galaxy

You are here:
Douglas Adams Virtual MuseumFrom the EditorsLife, the Universe, and EverythingLiterature and BooksThe Galactic Hitchhiker's Guide to the GalaxyThe Whole Sort of General Mish Mash 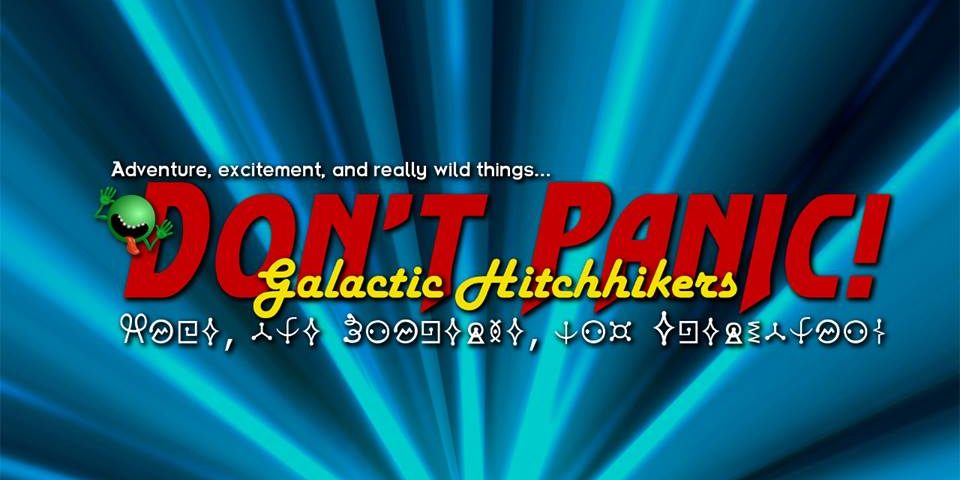 The main characters in Hexagonal Phase, illustrated by Trystan Mitchell / The Bigfoot Studio

Unless you have been living under a mattress lately then you may well know that March 8th, 2018, a Thursday, celebrated the 40th Anniversary of The Hitchhiker’s Guide to the Galaxy.  In addition, March 8th, saw the launch of the Hexagonal Phase of Hitchhiker’s, which greatly helps us get the hang of Thursdays. For six Thursdays in a row there will be a new episode of The Hexagonal Phase, which can be heard here, or clicking the image below

The staff at Galactic Hitchhikers are all in full slouch mode celebrating the return of the Hg2g gang, and honoring the First of Froods Douglas Adams as his birthday is two days away.  We eagerly await your entry into this year’s THUMB TOAST album to be recorded FOREVER. Visit the 2018 Thumb Toast Hg2g 40th Anniversary Edition

I have been trying to keep up with everything posted by Dirk Maggs, the show’s scriptwriter-producer of the prior phases of The Hitchhiker’s Guide to the Galaxy and now The Hexagonal, plus the LIVE! show. Additionally, Kevin Jon Davies, and Jem Roberts have posted a plethora of new articles celebrating Hg2g.  This flood of wonderful articles, and interviews to listen to, all  have caused my head to go all wonky (no not Wonko) to keep up with.

With regard to this incredible amount of material concerning the 40th Anniversary, The Hexagonal Phase, and to start off our Galactic Hitchhiker’s celebration (yes I know THE Anniversary was yesterday, consider this your timey-wimey news edition) I thought it would be good to offer a few selections here in case you may have missed them.

Firstly,
“Radio 4 celebrates the 40th anniversary of the iconic science fiction satire by Douglas Adams, The Hitchhiker’s Guide to the Galaxy, with a new series this week. Comedy producer and friend of the originator John Lloyd stars as the voice of the book. He and radio producer Dirk Maggs talk about the return of the ground breaking show”

Have a Listen to their discussion Here

The primary source for field research of  all things Hg2g is BBC RADIO 4 ,(<—-Do ya clicky thang) which has an abundance of article, clips, trailers and images.

One fine example is:

How we got to where we are tomorrow:
As Douglas Adams’s epic returns to radio four decades after it all began, we trace the cult of h2g2 – from radio to books to stage to TV to film and all the way back again…

Then there is this Hitchhiker’s Guide to Arthur Dent

The Independent Scholar that I am, who loves hearing (and researching through when I have the chance) about archived papers found this particular show quite incredible

SERIOUSLY…, DON’T PANIC It’s  The Douglas Adams Papers:
“John Lloyd unearths the private papers of his friend and colleague Douglas Adams, and discovers more about the agonies he went through to write The Hitchhiker’s Guide to the Galaxy, forty years ago.”
The program can be downloaded and listened to on the go and comes with a lovely “Contains Strong Language” warning.
Click to Read More

In order to supplement your enjoyment of the Hexagonal Phase Episodes and Appendices from the BBC RADIO 4 site, I highly recommend these additional primary sources of Froody material from Kevin Jon Davies and Jem Roberts:

Kevin Jon Davies, animator on The Hitchhiker’s Guide to the Galaxy television series now has a freshly pressed website where he has begun to tell his story with regard to his formative years working on Hg2g

“Hitchhiker stage shows, documentaries, an illustrated book, behind the scenes, in the wings and under the table.  Plus, of course, there was Blake’s 7, Terrahawks, Roger Rabbit, More Than 30 Years in the Tardis, Dalekmania, Sci-Fi Channel, Space Jam, Space Island One and the London Film & Comic Con. ”
READ MORE

Additionally in October 2016 I reviewed Kevin’s Illustrated Hg2g, which is one of my prized books in my Douglas Adams collection, a MUST HAVE if for some reason your personal library does not include it, read the following
Full review here

Jem Roberts  (featured left) is not just ‘zis guy but an AUTHOR, PERFORMER, AND MANY OTHER INADEQUATE NOUNS. Jem is the official Douglas Adams biographer. Jem’s work can be found in that very splendid and worthwhile book entitled:

The Frood: The Authorised and Very Official History of Douglas Adams & The Hitchhiker’s Guide to the Galaxy

Not only should you buy the hardcover, the paperback of said book, read them twice, dog ear a bunch of pages, over highlight a ton of lines, make sure you add it to your permanant reading pile on your nighttable.
By adding The Frood to your nighttable you will never go to bed in a bad mood and alongside your rubber ducky will never be alone.

Jem posted yesterday his own reflections on the 40th Anniversary of Hg2g, which you can read about here While you are at it, scroll to the bottom of the article as you may want to check out Jem’s Fits concerning the writing of The Frood.

In upcoming Fits here at Galactic Hitchhiker’s celebrating the 40th Anniversary of The Hitchhiker’s Guide to the Galaxy, we will further explore the work of Dirk Maggs, Kevin Jon Davies, and Jem Roberts, plus other splendid and worthwhile Douglas Adams topics. STAY TUNED

Like Loading...
Categories: Douglas Adams Virtual Museum, From the Editors, Life, the Universe, and Everything, Literature and Books, The Galactic Hitchhiker's Guide to the Galaxy, The Whole Sort of General Mish MashBy Anthony BurdgeMarch 9, 20181 Comment
Tags: #FROODTOASTdouglas adamsGalactic HitchhikersHitchhiker's Guide to the GalaxytowelsZaphod Beeblebrox
Share and Enjoy!
Share with FacebookShare with Twitter