You are here:
Douglas Adams Virtual MuseumFroodism/Taowelism: The Tao of the TowelLife, the Universe, and Everything 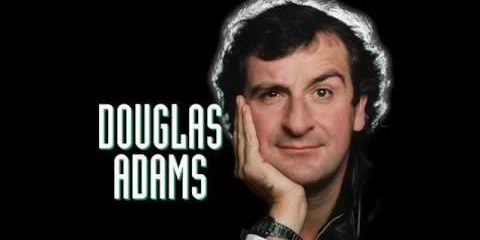 Howdy Hoopy Froods!
In one month will be the 66th birthday of our Founding Frood, Douglas Noel Adams, born on March 11th 1952.  Last year the staff here at Galactic Hitchhiker’s created an annual celebration to honor the first of Froods called “Thumb Toast to the Frood.”  This celebration, now in its second year comes at a time of a great galactic conjunction, the 40th Anniversary of The Hitchhiker’s Guide to the Galaxy.

If you are new to Galactic Hitchhiker’s, and our Thumb Toast, here is the…

STORY SO FAR…
A few of our inter-dimensional members thought it would be a pretty neat idea, something in league with digital watches, to honor the first of Froods, Douglas Adams, on his birthday.  There are a number of authors who have their birthday honored by fans via a Toast or visit to a location associated with said author. For example J.R.R Tolkien has had an annual birthday toast for decades hosted by The Tolkien Society and fans around the globe.  In addition H.P. Lovecraft fans visit his grave and read from his work. Therefore, Galactic Hitchhikers would like to honor Douglas Adams in a similar fashion, but on a more Galactic scale.
READ MORE

For the 2017 celebration we asked froods from across the planet to either send in a message via the form on the Toast page, or take a picture and their Thumb Toast, which you can see a few examples via our 2017 Album.

This year being the 40th Anniversary of The Hitchhiker’s Guide to the Galaxy we have changed up the details a bit and want YOU, Yes You Hoopy Froods, to be a lil extra creative in your submissions. It is entirely up to you how you would like to participate in our 2018 Thumb Toast to the Frood, but we would really love it if you considered these additionals options:

You do not have to be limited to any of the details of participating, if you have another wild and crazy idea to contribute to our celebration then by all means go for it!!

However, One Last Requirement, as cited on the Thumb Toast Page, please use the #FROODTOAST hashtag

VISIT OUR 2018 THUMB TOAST TO THE FROOD PAGE