Not My President: 45 is Not Zaphod Beeblebrox

You are here:
Life, the Universe, and EverythingOpinionPolitics and World Events 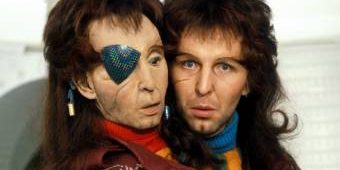 Special Addendum Number 1.0- Regarding the comparison of the 45th President of the United States of America to Galactic President and Worst Dressed Sentient Being in the Known Universe, Zaphod Beeblebrox:

While it is known to the editors that it is easy to think “they voted in an idiot,” and draw

comparison the current Cheeto in Chief and the Big Z, Galactic Hitchhikers would like to point out that Zaphod Beeblebrox has at least a few likeable qualities.  Although Trump’s hair may be a semi- sentient creature from a distant world, only Earth can produce an asshole like him.

Zaphod is just this guy, you know? Beeblebrox is, as we know, an adventurer, ex-hippy, good timer (crook? quite possibly), manic self-publicist, terrible bad at personal relationships, and is often thought to be completely out to lunch. Donald Trump has never been an adventurer, ex-hippy, or a good timer. Yes Zaphod is an idiot of a Galactic President, but his actions never come from malice, rather they start an end in plain stupidity, often in ego, and always with ten out of ten points for style.

This Trump fellow on the other hand has as much sex appeal as a road accident. Not actually evil but he is bad-tempered, bureaucratic, officious and callous. Draining the swamp by overfilling it with greasier corporate elements which displace the even the greasiest paid for partisan politicians of Washington DC. He wouldn’t even lift a finger to save his own grandmother from the Ravenous Bugblatter Beast of Traal without orders – signed in triplicate by the Kremlin, sent in, called fake news, sent back, queried, lost, found, denied, accused of being Hillary Clinton’s emails, subjected to public inquiry, lost again, and finally buried in soft peat for three months and recycled as firelighters. The best firelighters, everyone tells him so.

Despite having a self-professed big brain and his claims to have all the best words, Donald’s speeches and public appearances are more often than not far worse than even

the poetry of Paula Nancy Millstone Jennings; only having appeal to slug like creatures whom wave their firearms in the air and have no large intestines to reach up and throttle their brains. His approach to providing health care to the citizens of the country he leads is to repeal the Affordable Care Act and replace it with all out nuclear war. Less people to cover does equate to more affordable providence of care, it is supposed.  If the great nation of Canada was smart they would help Mexico build the wall Donny wants so badly, and then build their own wall between the US and themselves as it will help keep out the inevitable hordes of US citizens seeking to escape America as refugees.

Donald J Trump is a Vogon, and not even a very good one.  His father got him deferments from having to take Bureaucracy classes, and he failed all his other subjects,

but he is a Vogon nevertheless.

Let’s give the Big Z a break guys.  We are all so very tired of winning, but signing for the destruction of Earth is nothing compared to the Tangerine Menace disassembling all that is good about it and selling it off to the highest bidder. “Love and Kisses” to make way for a hyperspace bypass would be an act of compassion in contrast to divide and conquer. Stealing a starship is a lot less concerning to us than stealing the integrity of the office of the Presidency of the United States. At least Zaphod offered to show his spaceship to the girl, rather than grabbing her right by the……you know where we are going with this.

Remember, we only have just under three and a half more years to endure.  Meanwhile, we should not allow ourselves to be divided. We cannot fall for the callousness and hate. Find something to do for the unity of all those living on this planet we share. Stay vigilant, stay hoopy, RESIST, and most of all:

If all else fails the Frood has left us some great advice: