Friends and Fans Remember Douglas Adams in You and 42 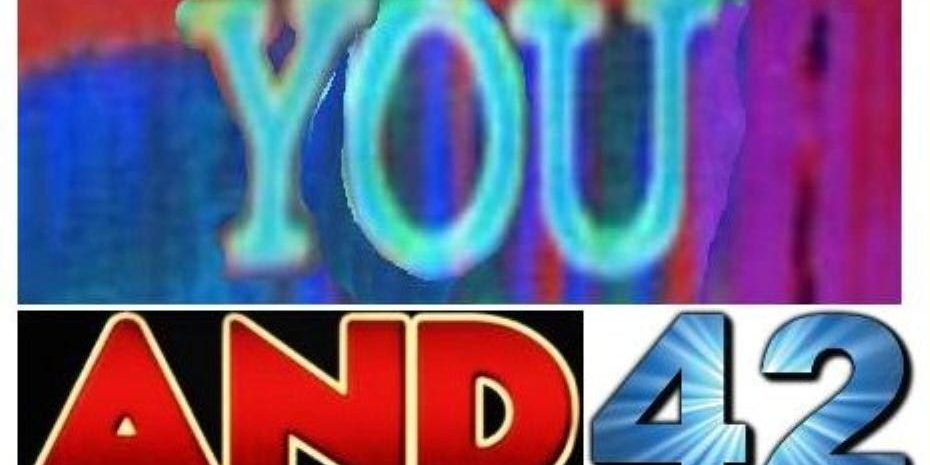 Photo Credit:
Christina Franco (Courtesy of William Todd-Jones)
(given to Douglas Adams mum)
Many thanks to James Thrift (Douglas’s brother) and to the family of Douglas Adams.

On this date the first of Froods, Douglas Adams, was born.  Our Douglas Adams fan community here at Galactic Hitchhikers are noting the occasion of his 65th birthday with our own special Thumb Toast to the Frood.  Whether you are a member here, or a part of another fan community, we are all brought together by our shared love in the life and work of Douglas Adams.  I am truly humbled to be a part of the global fan community celebrating the life and work of one of my literary and intellectual heroes. In addition, my wife and I have been entrusted by Watching Books to compile and edit You and 42: A Douglas Adams Fan Anthology.  It is about this project I wish to update you with news of new authors I am incredibly happy to have aboard.

For several years now my wife and I have contributed to a few volumes in the “You and Who,” line from Watching Books.  What I have enjoyed in reading the finished work is the personal nature of each essay. The format of each volume is a series of essays each focusing on a particular area or production, through which the authors can talk about their personal experiences. In the case of previous works the topic has been Doctor Who, sci-fi, Blakes 7, Target Books or the forthcoming David Bowie collection Me and the Starman. The content are not reviews, but rather  essays that take a more autobiographical or anecdotal slant.  This is the case for You and 42, which I have been quite emotionally moved by each piece submitted.  There are a few authors who have contributed more than one essay and for that I am incredibly grateful.  There are a few who had the chance to meet Douglas Adams at an event such as a convention or book signing who relay how that experience positively affected them.  There are other authors who were so inspired by various works by Douglas Adams that it affected their career choices and creativity.

In recent weeks I received contributions by two authors who were friends with Adams and write of events, moments and memories with Douglas Adams.  It has been an incredible pleasure corresponding with these gentlemen about their essays.  The essays submitted cover periods in their life with Douglas Adams, which have been a joy and humbling read. It is my hope that you have watched and enjoyed the recent BBC America “Dirk Gently,” series and/or read the IDW Dirk Gently comic.  The Writer/Executive Producer of BBC America’s Dirk Gently and Writer of the comicbook, Arvind Ethan David, has joined our growing list of authors for You and 42.  In addition we have William Todd-Jones aboard who is a  Creature FX Consultant, British puppet designer, performer, director, movement consultant and writer for film, television and theatre in the UK and abroad.
In 1994 William Todd-Jones joined Douglas Adams and several other friends, who took up the challenge to trek from the coast at Mombassa to the top of Kilimanjaro to raise money for rhino conservation.  If this wasn’t enough of a challenge, they decided to do it in rhino costume!

“Douglas was determined to share the difficulty and spent hours taking a turn in the costume – which he suggests, had him looking like a giant prawn tempura – but it was easier than completing the manuscript he was meant to be writing, he said.”

In Walking with Douglas/How Doug helped the 1994 African Rhino Climb to save endangered species, William Todd-Jones discusses how he and Douglas Adams got involved in the now infamous Rhino Climb.  Additionally, William has contributed Waking with Douglas, which discusses the passing of Douglas Adams.
We are also quite grateful to William’s daughter Lillian who has contributed her own essay entitled “The Four Ages of Douglas.”  Lillian met Douglas a couple of times when she was quite young, his influence has coloured her life and I felt that further words for You & 42 could best be offered by the next generation. (William Todd-Jones)

“When I was 5, my dad left. He didn’t leave with another woman, or to have a crisis with a bald patch and BMW. No, he left – temporarily- to dress up as a rhino, and walk up Africa’s highest mountain. In other words, to wear a herbivore suit and travel to a continent crawling with lions, which was impossibly far away, for an unacceptable amount of time, with a bunch of other grown-ups; including someone called Douglas Adams.
I wasn’t very happy about it.”

Around this time Arvind Ethan David was in his second term at Oxford and had adapted for stage Dirk Gently’s Holistic Detective Agency with James Goss.

The adaptation began at their British boarding school, and was revised for their adaption as undergraduates at Oxford.   In 1995 Arvind Ethan David had dinner with Douglas Adams to discuss the play, which Adams had attended. “We talked about the show – with ridiculous generosity he decided that in changing it, we had in fact “fixed” his plot. He also said we had now got him thinking about Dirk as a TV series or movie…”  The play went on to win Best Adaptation for Dirk at the 28th LA Weekly Theater Awards (2007).  In Me and 42…Or how Douglas Adams taught me that the meaning of life can be found in the fundamental interconnectedness of all things, Arvind Ethan David discusses The Story of How Douglas Adams Changed My Life.  Arvind’s very moving essay highlights his education, the beginning of his career, and how Douglas Adams mentored him and their lives becoming intertwined.  Bringing Dirk Gently to the world has been a 20 year singular dream for Arvind Ethan David.

“He decided to make our version the “official” version and gave us perpetual rights in it. We came to an arrangement whereby a proportion of the royalties would always go to charity – in fact to his beloved Rhinoceros (he was a founding patron of Save the Rhino International, and famously once climbed part way up Kilimanjaro in a rhino suit for the charity).”

As a big Dirk Gently fan, whether book, audio dramatization, now television and comic, I have quite enjoyed Arvind’s brilliant vision and am very humbled and grateful that Arvind has shared his story with us.

If you would like to contribute to You and 42, there is still time before we hear any whooshing sounds, please visit the following page for all the details.

Click here to send me an inquiry via email