Be Excellent (and Charitable) To Each Other

You are here:
EntertainmentFroodism/Taowelism: The Tao of the TowelI got a buck for thatLife, the Universe, and EverythingThe Whole Sort of General Mish Mash 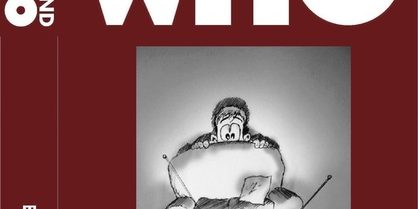 Howdy Hoopy Froods!
It should not matter the day, time, season, or holiday, we should all be excellent to each other, and help those in need. The climate of our current world situation looks grim each and every day, whether war, politics, human rights violations, hunger, or children in need, being excellent to each other should be of great importance. The fall holidays are upon us and we all seek that one great gift for a friend and/or loved one.  In the following I shall cite some great books that may appeal to you or said loved one, which will help out a charity at the same time. In addition I draw a few quotes below from our Galactic Hitchhiker’s Constitution to illustrate a point or two.

As a Fellowship of the Frood we are always excellent to each other, and continue to “…see the Guide as a filter to see the universe through, it reminds us that life is far too ridiculous to be taken too seriously…”  I am of the opinion we should also strive to help those in need as we are best able, whether through kindness, an uplifting word or comment, actions (i.e. helping the disabled and elderly) or donating to a charitable organization.

With this said I would like to appeal to our community as “…science and science-fiction fanatics, social activists, and hopeful futurists. We are space-hippies and dreamers, gamers and geeks, self-professed professional slackers, forward thinkers and generally good folk….”  If you would like to help out a charity and get some excellent books written by science fiction fans, then keep reading.

As some of our GH Readers may know my wife and I are writers,editors and publishers.  In recent years we have had the opportunity to write for Watching Books and their line of books where all proceeds are donated to charity. Watching Books is located in the UK and you can click here to read “A Note on Our Charitable Donations,” which describes how their “rolling charity payments” system works.  The current charity they are providing donations toward is the Terrence Higgins Trust.
My wife and I first got involved with Watching Books by contacting J.R. Southall when they announced their YOU and WHO project.  Southall is a Starburst Magazine columnist, host of the Blue Box Podcast, and creator of the You and Who series of books.  With You and Who, Southall started a series of books adapting the title to varied themed books, such as You and Who Else, You and Who: Contact Has Been Made, the forthcoming You on Target and our own title we are working on for them: You and 42: A Douglas Adams Fan Anthology. I shall speak of You and 42 a bit more below, but offer below descriptions about a few of their titles you may consider as fans of Doctor Who and science fiction.
However, please visit the Watching Books page for a full listing of all their available titles

ABOUT YOU AND WHO (respectively borrowed from Watching Books)
After almost 50 years of television serials, original novels, comic strips, audio dramas, short stories, radio plays, cartoons, graphic novels, cinema films and just about anything else you could possibly imagine, after almost 50 years of a series which has change as its most fundamental conceit, there’s only one thing most Doctor Who fans can agree upon: how special it is.

In December 2010, Starburst writer J.R. Southall embarked upon a project that would demonstrate just how much variety there was among fans of the show, and that would conversely show just how much they all had in common, too.

You and Who is the result of that project. It’s an anthology of stories, written by fans, in which those fans attempt to reveal just how and why they became fans of Doctor Who in the first place. There’s humour, there’s horror, and there’s heartbreak. Just as there is in the series itself.

They’re the story of You and Who.
This title is available at AMAZON.CO.UK and AMAZON.COM

ABOUT YOU AND WHO ELSE
Television is the route by which we map our lives. From the day we are old enough to understand words and pictures it is a constant companion, educating and entertaining us, helping us to understand the world around us – and firing our imaginations off into the far reaches of an infinitely varied universe. From Ace of Wands to Worzel Gummidge, from Randall & Hopkirk (Deceased) to Red Dwarf, from the moment Professor Quatermass’ rocket ship returned to Earth, to the moment Ian and Barbara entered the Doctor’s Ship, fantasy television has had an extraordinary effect on our emotions and our intellect. Whether it be exploring space or travelling through time, surviving the aftermath of some Earthbound disaster or creating new worlds in uncharted territories, the writers and producers of speculative television have used the format to reflect and inform the world in which we live. And whether it be through horror, science fiction or imaginative fantasy – or a combination of all three – we have all been touched in some way by the creativity and insight provided by such visionaries as Gerry Anderson, Nigel Kneale and Douglas Adams. You and Who Else is a unique history of sixty years of British fantasy television, and a definitive record of its place in our lives – as told by the people who saw it: the viewers.
You and Who Else is available in a variety of formats found on the Watching Books page but we encourage you to get this chunky volume from either AMAZON.COM or AMAZON.CO.UK

ABOUT YOU AND WHO CONTACT HAS BEEN MADE
Very few television programmes make it to their fiftieth birthday. But then, Doctor Who is just a little bit special. From its humble beginnings being recorded in a tiny studio on 405-line black and white video cameras with a minuscule budget, to its latest incarnation on HD as one of the BBC’s flagship dramas, Doctor Who has always moved with the times, and often reflected them. For the last five decades, the series has inspired and engaged audiences in a way that no other television programme has ever managed. For more than 26 years, the original series delighted children of all ages with its unique blend of sci-fi and horror, excitement and scares, cliffhanger storytelling and, above all, monsters. As the programme grew, so we grew with it, absorbing its pleasures in diverse and changing ways. As it enters its anniversary year, Doctor Who is more popular than ever before. This wholly original blend of science fiction concepts and magical storytelling, updated for the 21st century, is delighting a whole new generation of fans, alongside those of us who waited patiently for the inevitable regeneration. You and Who: Contact Has Been Made is a record of how that relationship began, how it continues, and of how we have experienced those fifty years, as written by the show’s own fans. This combined edition of You and Who: Contact Has Been Made features a reduced print size necessary to include both volumes in one book, and includes two brand new replacement essays not featured in the first edition of Volume One, as well as several brand new essays bringing the book up to date with Doctor Who’s fiftieth anniversary programming. 100% of the royalties from You and Who will be donated to charity.
You can acquire You and Who Contact Has Been Made as a single combined editions, from two volumes, or purchase the two volume sets.
Please Click here to see Watching Books for varied formats and purchasing options

Earlier this year it was announced that my wife and I are compiling and editing a Douglas Adams Fan Anthology for Watching Books entitled: You and 42. A topic quite applicable to our community here, which you can read more about in my GH article here. We have been taking contributions all year long, and are still open to submissions. As lifelong fans of The Frood, my wife and I are very honored that Watching Books accepted our proposal  for this book. You and 42 is dedicated to all things Douglas Adams and will illustrate how much he is loved and missed through our adoration of his work.  We already have contributions from a number of members here at Galactic Hitchhikers, like our founder Zaxley Nash, Jared McLaughlin our audio/web engineer, the fabulous writer Demetria Blacksmith, Kevin Jon Davies (who did the Guide animations for the Hg2g TV series, and The Illustrated Hitchhikers Guide to the Galaxy), and Jay Rainha who has provided Guide styled entries that will appear throughout the book. If you would like to write for You and 42, please visit the project page here, to get all the details.

My wife and I have a fair list of publication credits but it is our work for charity projects that mean the most to us. In the end, when these books sell the money is going toward services our fellow human beings need the most. It is our hope that as part of this community, and beyond, you will consider purchasing the aforementioned titles, or others listed on the Watching Books website, and help out a charity.  Have a wonderful, blessed and geek filled holiday season.

Like Loading...
Categories: Entertainment, Froodism/Taowelism: The Tao of the Towel, I got a buck for that, Life, the Universe, and Everything, The Whole Sort of General Mish MashBy Anthony BurdgeNovember 27, 20161 Comment
Tags: bookscharityDoctor Whodouglas adamsGalactic HitchhikersHitchhiker's Guide to the GalaxyI got a buck for thatscience fiction
Share and Enjoy!
Share with FacebookShare with Twitter