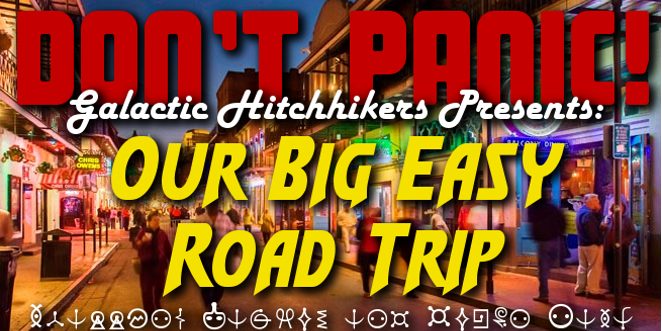 The moon rises over the bayou, casting a strange glow on the Spanish moss draped in the darkness. Somewhere a pot of gumbo cooks in a Voodoo Queen’s lair. A man orders a po-boy from a restaurant while beside him a jazz musician plays his horn and fills the streets with the sounds of well…..jazz. There are more than likely more things than this in New

There and back again

Orleans, Vampires I guess, but we don’t really know. In fact nobody does.

Boldly we volunteer to finally solve the mystery of what exactly a New Orleans is. Is it really just a single New Orlean, or are there more than one? And what exactly happened to the old Orleans? Grab your towel and join Galactic Hitchhikers in an action packed adventure thrill ride to wow the senses as we hit the road for the Big Easy! To celebrate our recent nuptials, and the general desperate need for a vacation, we are driving from our home near Chicago to New Orleans and back. As is tradition, we’ll stopping at all the finest road side oddities along the way. From mom and pop greasy spoons in the middle of nowhere, to the gift shops that time forgot, Galactic Hitchhikers will leave no stone un-turned to find action, excitement, and really wild things! Or at minimum we’ll be drinking in strange places, rather than drinking until our place seems strange….and/or drinking until our place doesn’t seem strange as mood and/or state of mind decrees; you know: Action and Adventure!

Once in New Orleans we’ll have field reports nightly, posted to our hoopy home on Facebook.

Friday, 10-28-16-While stopping for a couple days in neighboring Slidell LA, we meander the region just outside the city and visit two famous plantations, the Laura Plantation, and Oak Alley. Odds are we can find an authentic Mint Julep somewhere along the way.

Saturday, 10-29-16- After checking in to the famed Roosevelt Hotel, and checking out it’s

Seems like a nice place to get thrown out of

The Voodoo Bone Lady herself

practitioner and life coach “The Voodoo Bone Lady,” who’ll regale us with tales of voodoo and witches, vampires, and pirates of local lore.

Then back to the bar.

Sunday 10-30-16- We will be touring the Garden District. We’ll scope out the coolest mansions, and see if we can scare up some fun in the Lafayette Cemetery. Later we’ll be touring the French Quarter again, this time with Vampires. We’ll explore the city’s nightlife, and end the evening with drinks in a vampire bar. Maybe someone will give us the choice they never had.

We’ll even be checking in for  Sub-Etha Channel 42 for Therapy Thursday and for the regular Sunday hangout!