All Hail the King, Elvis Presley 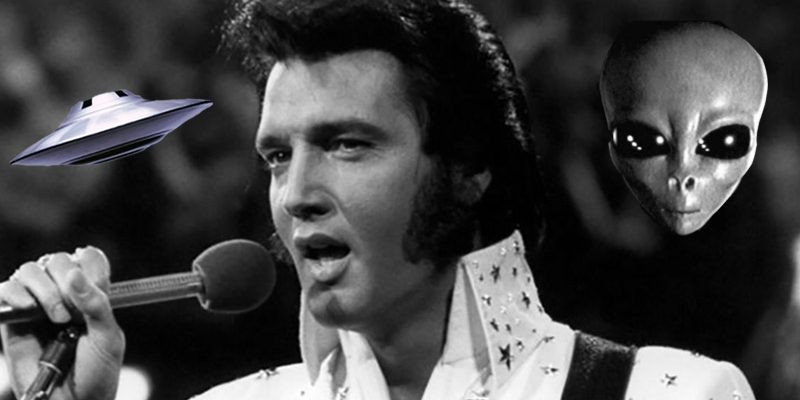 As some of you may know, there are many connections between Elvis Presley and The Hitchhiker’s Guide to the Galaxy. I thought I share these bits with you accompanied with some nostalgia on the anniversary of the King’s Death.

The First fact that most of you are probably familiar with is the fact that Elvis Presley appears in the Hitchhiker’s Guide to the Galaxy stories briefly.

In “Mostly Harmless”, He is the singer in the bar named “Domain of the King”. He is not  named intentionally, but the name of the bar and the large “EP” sign on his pink spaceship is a dead giveaway, given that the Real Elvis Presley owned a pink cadillac during his life.

There is also a small wink at the Elvis Presley fans regarding the shoes Ford is wearing at the beginning of this novel.Yeah, you guessed it right. Blue Suede Shoes.

Now, it has been long speculated that Elvis Presley didn’t really die, in fact He was just abducted by Aliens. Now, according to story, the Truth is: He really just decided to take the opportunity and hitch that ride from home.

Unfortunately, in our reality, He did leave too soon. He died at the age of 42, at home. Coincidence? I think not. Maybe He has something to do with the Meaning of Life. Maybe ELVIS PRESLEY IS THE MEANING OF LIFE. One can only speculate.

to tell what is fiction and what is reality, but if I could pick one, I’d hope Elvis left this planet on his own terms and now He is probably working on a Mega Galactic Hyper Super Tour with the Ziggy Stardust himself. After all, These Two Hoopy Froods were born on the same day, 12 years apart! Fingers crossed!

And now,music from Elvis Presley to you, Hitchhikers!

WE ARE CULT: BRISTOL MEET A fun, friendly celebration of cult TV!
June 4, 2019