Not another cat story on the internet

You are here:
Life, the Universe, and Everything 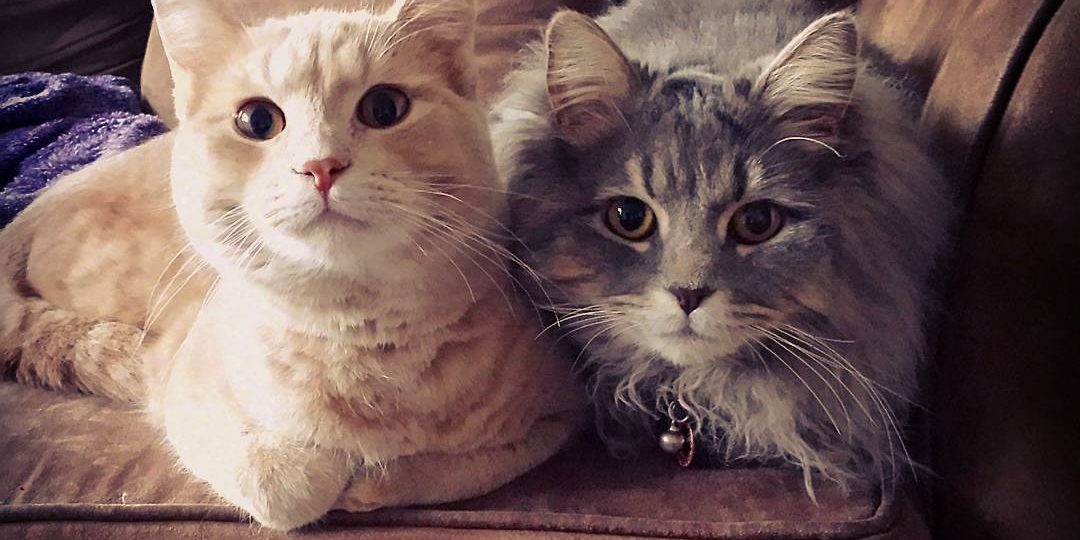 Those of you who know me know that I am a cat fanatic. I don’t know how it happened, I used to be more of a dog guy really. Cats worked their way into being just about my favorite creatures on our planet. My fiance Nicole and I have four living with us. After adopting each one we say we are at cat-pacity right meow, but they just keep charming their way into our hearts and home.

I have a theory that we don’t pick cats, they pick us. It started with Squee. I found our oldest around 11 years ago while walking home from work. It was night time as I cut through a local park, and from the tree line of the nearby woods I heard a desperate meowing,

By the light of my Bic lighter I found him in the brush. He was quite wary of me, I had trouble getting him to come to me, so I ran home and got Nicole to help. We were able to coax him out of the woods, where it became obvious someone had ditched him there. Barely weaned, he had been left with a can of tuna that was covered in bugs. We took him to our house, and promised him we would find him a good home. Funny how quickly the good home became ours. We had to get him to the vet very soon after, Squee had a bot fly larvae in his jaw. The doctor removed the insect, and told us that Squee was lucky we found him. He was dehydrated and it was July. He might not have made it another day out there.

Adopting Squee was really something special for Nicole and I. Looking back I think it solidified our relationship in a lot of ways. We weren’t just a couple any more, we were a family. Squee, while being kind of hateful to most other humans on the planet, (Friends who know us have scars and/or tales to tell) has been a great friend….a good boy besides being sort of a grumpy asshole most of the time. He traveled out west to Wyoming with us, camped across the country on our adventures. Our lives have been made much better by knowing him.

After Nicole and I came back home to Indiana from our travels. I started work at a local pawn shop. One day a gal I worked with came in and asked if I heard a cat outside by the dumpster. I told her no, but went out to investigate. Where there is smoke, there is fire, right? What I found in our dumpster saddened me for humanity, a precious little guy in a box. A bowl of rancid milk with him, he was sickly looking and in very rough shape. Someone had, and please excuse my French here, thrown a fucking kitten in the trash. Of course I pulled him out and took him home, and once again it was funny how quickly finding him a good home became ours.

Obi-Wan is like the Dude of cats. Laid back and loving, his tender paws reach up to touch your cheek when you meet him. Squee of course hated this addition to our little family, but Squee hates everything. After a couple weeks we started to see Obi acting funny, almost as if he was drunk. Luckily Nicole works as a vet tech at a top notch animal hospital so the youngling Obi did not have to wait long for attention. Through tests and more tests and a trip to a specialist in Chicago were learned that the little Dude had a liver shunt. Essentially the blood does not get cleansed through his liver like it should, it goes around his liver through a shunt. Bypasses really don’t have to be built Mr. Proser.

Through the generosity and care of the Galactic Hitchhikers community, and some really great friends we were able to raise enough funding to get Obi a surgery to remove the shunt. Unfortunately the surgery was not successful. The surgeon confided to us that the MRIs were misleading. Obi has more shunts forming and that removing the one was just too dangerous the way it was situated, and even if he did manage to remove the shunt others would soon take its place. Obi-Wan lives on medications four times a day and a special diet, but ultimately he will have a far shorter life….we love him far more of course, and cherish every day we get to be with him.

Content to be a two cat house, it wasn’t very long until a spunky goof ball with a messed leg came into Arbor View from a local shelter. His back leg was badly damaged, either from birth or injury the doctors could not tell.  They decided it would have to be amputated, at a

cost that the shelter could not afford. Sending him back to the shelter would mean they would have to euthanize him. Nicole watched him on the exam table. Despite dragging his leg behind him he played with the toys they offered him, still a kitten aside from the pain.  Nicole locked misty eyes with the doctor across the table and that kitten did not go back to face a death sentence at the shelter that day. That look eventually led to the adoption of a three legged wonder named Anakin. We are grateful to Arbor View’s doctors for performing his amputation for free. Ani with only three legs is quite the mover. He’s learned to climb and run, and he ends of being a rough and tumble kind of guy. In his last incarnation he was an alley cat. Head boops are strong with this one. Once again content, three cats…or 2 and ¾, as it were, was just right. My Three Sons.

As I type these words our youngest, Mac, is trying to help me by standing on my keyboard.

Yes, it happened again. I used to say I’m a sucker for a sob story and a cute face, but I am beginning to think Nicole and I are kitten addicts. I wonder if they have support groups for that. Mac came to Arbor View from a great place called Kibble Kitchen. Kibble Kitchen started as a pet food pantry, helping those that could not afford to feed their families. Now they have blossomed into a shelter and rescue, helping with spay and neutering, vaccines and adoptions. Mac was staying with them when he developed strange abscesses on several parts of his body. He was brought to Arbor View where the doctors put drains in his abscesses that had to be flushed twice a day. This is where Nicole and I come in.

We volunteered to foster him while he was on the mend. After Obi and Ani’s surgeries we had become somewhat experts on the convalescence of cats. Our spare room was set up already just for it, and remains the domain of our tribe to this day. In a few weeks’ time, and with additional help from Kibble Kitchen Mac recovered well. Being at heart an enormous softy I fell in love with Mac rather hard, and it was clear he felt the same. Mac is daddy’s boy, preferring more than most anything to sit on my shoulder, or to hug his arms around my neck. It was really hard to not want to keep a kid like that. So of course we did.

I believe in my heart of hearts that our lives are measured by the service we give to other beings, especially those that can never pay us back, although our boys pay us back ten thousand fold with the love and cuddles they give us. A decade of feline company and I would do anything I can for any cat. They are a great and mystical race, and my life in truly enriched by keeping their company.

Last night Nicole and I were out on the patio watching the lightning as a storm rolled in. We saw a Mama cat out by the dumpster, she was picking food out and bringing it to her two kittens who romped and played nearby in the parking lot of our apartment. We talked of who they might belong to, and the possibility of where to leave food for them. As mentioned, we have four boys, we have enough cat food to share. As the storm rolled in the trio, Mum and her kittens disappeared behind the fence nearby and we went into the house to get out of the now sudden rain.

This morning I started my day as any other. Shower, Facebook, coffee. Love you darlings were issued to Nicole and Squee, Ani, Obi, and dear little Mac. I walked down the stairs mindful of my work day, thinking of all the crap I had to do. Sunglasses on, light a smoke, turn the ignition. What happened next shattered my heart.

I pulled out from my parking spot and heard a great yowl. I slammed the car to a stop to see one of the poor little kitten writhing in my parking spot. I panicked. I ran upstairs to get Nicole. She ran down with me to see if he was okay, but sadly there was nothing that could be done. I sat sobbing in the parking lot as Nicole carefully wrapped him in a towel. Through my tears I saw a spot of blood on the blacktop. I fell to pieces.  We rushed him to Arbor View, knowing that it was too late, but wanting to be sure he was not suffering.

Little guy never had a shot in life. My heart is heavy as I write these words. How could this happen? How could this happen to me of all people? My life literally revolves around our cats. I blame myself for not seeing, for not knowing; but I know I really can’t. Neglect and human stupidity are at fault, but not my own. Cats are domesticated animals and need people to keep care of them. If a cat has kittens it is the responsibility of the cat’s caretaker to take care of the younglings too, or at a minimum be aware that your pet has made offspring.

Our boys don’t go outside, they are perfectly happy. I know a lot of people like to let theirs cats outside, and while I disagree personally, at least be sure to spay and neuter. Be aware of your cat, be mindful of its health and well-being. If you don’t, why do you have a cat?

The good news is they don’t have to. There are lots of people to care, far enough to go around. Every community has a shelter, get involved! Donate if you can, if not even your time, no bit of help is too little to make a difference. Yes, there are plenty of ills in the world, woes a plenty bigger and more worrisome; but hope is a fire. Kindled small it can grow and light the world. Be someone’s hope.  Be a light.